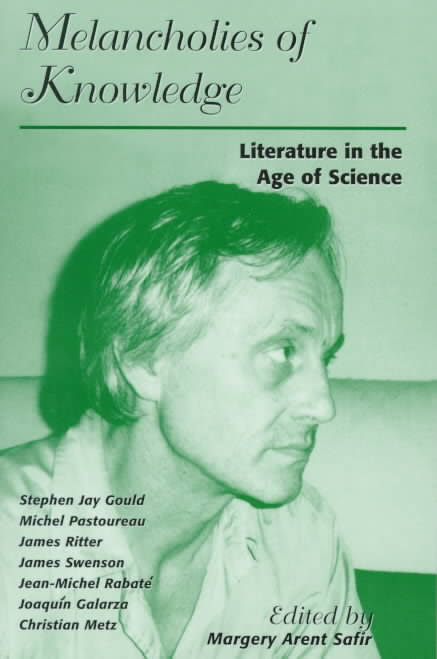 Melancholies of Knowledge is a collection that brings together a snapshot of perspectives near the end of the last century on the role of “literature in the age of science.”  It’s a worthwhile read.

Any alteration in man’s physical position in the universe must correspond to an alteration in this intellectual and affective position, that of literary discourse, which is the sum of all those coordinates.”

Rio the novelist, says Safir, accepts that the writer’s duty — he calls it “honorable ambition” — is

. . .nothing less than to describe a sensitive, unique being reacting to a new dimension of his surroundings, without restriction, not only as regards social mores and landscapes, but also and, perhaps above all, as regards knowledge, the state of man’s theoretical conception of the world” (“Le reveur et le logicien,” in Reve de logique, pp. 71-72).

This may be all well and good, but, to hijack William Blake’s “fearful symmetry” phrase, the literary crowd is at a serious disadvantage when they attempt to assert their brand of affective “knowledge.”  Paired with scientist’s superior methodology — and knowledge — the asymmetry is fearful.

M. A. Safir, Ed., Melancholies of Knowledge: Literature in the Age of Science.    Albany NY: State University Press of NY, 1999. 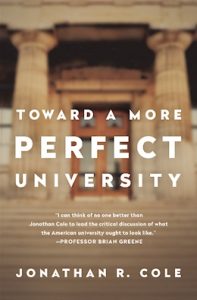 Jonathan Cole (@jonathancole2), interviewed by Leonard Lopate on WNYC about his book Toward a More Perfect University (Public Affairs @Public_Affairs, 2016), bemoaned the lack of diversity in today’s universities. But it’s not the meaning of “diversity” filling the airwaves today.

“Bring the faculty back into the [student] selection process . . . who have a sense of various types of qualities and skills and try to bring these different skill sets together. Let’s bring a great artist, a great poet, and a great musician and a great scientist together and have them experience the interaction with each other in a way that they can learn from each other and have an idea of the way in which diversity really should operate … Not only different cultures because of different ethnic and racial backgrounds, but also because of the multiple talents that the people have in the class. 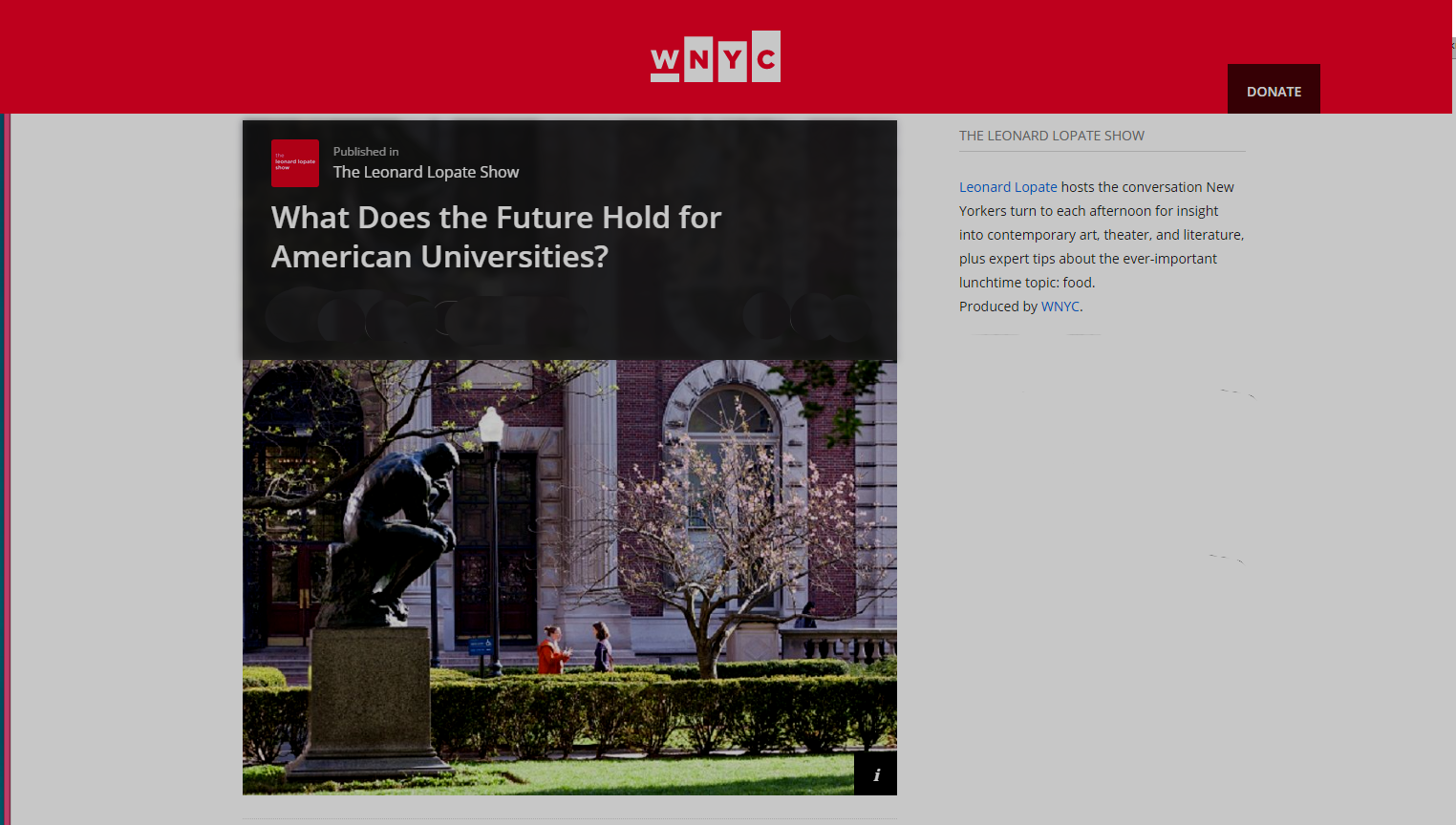 An exciting new generation of makers is merging creative ambition with the disciplined rationale of hard science. They are Ph.D.s, lvoers of the outdoors or believes in the ability of #bigdata to predict our palates. Together, they are redefining and elevating the union of art and craft.”

This snip is part of a multi-page advertorial by @GlenmorangieUSA in the New York Times. 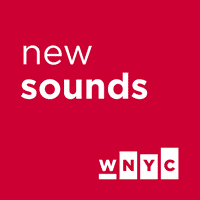 ♫ John Schaefer provides excellent curation of contemporary musical settings of great Latin-American poets. Where else could you find a collection like this, in such a readily digestible format?

SNIP “Listen to contemporary settings of great Latin-American poets on this New Sounds. Hear a combination of choir and electric guitar by built around the poetry of Chilean poet Elias Letelier by Canadian composer/electric guitarist Tim Brady.  The work, “Atacama,” is sung in Spanish, with text about metal, circuitry, atoms and not thinking about microphones. ”

Sequences and Pathogens: An Anthology of Poems and Reflections, edited by Dorothy Lehane and Elinor Cleghorn (Litmus Publishing, 2013).

I was asking something which is the scientific equivalent of: Have you read a work of Shakespeare’s?

That should sound familiar. It was CP Snow considering the response he received when he asked supposed experts in the humanities about the second law of thermodynamics. Today the internet, Wikipedia, mashups, the semantic web and open publishing are a few of the trends that have served to dismantle some of the traditional silos between science practitioners and their counterparts in the humanities. How far have we come since his initial 1959 insight? Are these proving to be, as some believe, complementary perspectives? 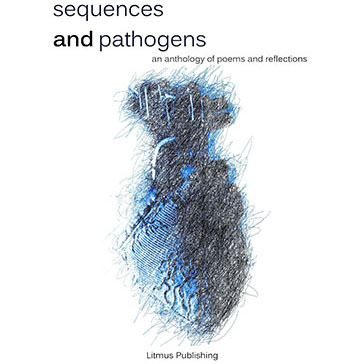 A short answer: Don’t pop the cork in the champagne yet. A longer answer is contained in the ambitious experiment presented in the book Sequences and Pathogens.

The anthology edited by Lehane and Cleghorn was an outcome of a project to, as Lehane writes in her introduction, “to make science more palatable to the non-scientific reader.” The results don’t necessarily “elucidate” or aid digestion of scientific information, she writes, and that may surprise no one. Somewhat more surprising was the sometimes personal connections made by the poets or the scientists involved to their sense of working inside the other’s discipline. In other words, the participants tended to focus on process rather than knowledge. In fact, Lehane concluded that “science is already palpable,” “enmeshed in language rich in image and metaphor.” More on that later.

The subtitle of this anthology is “Poetry Meets Biomedical Science,’ reflecting the aims of a project to pair poets with counterparts in biology.The subtitle more than the title of the collection hints at the challenges and conflicts faced by the published participants. While some scientists could perhaps approach poetry with, say, the perspective of amateur critics, these poets could not do the reverse with biomedical knowledge. A weak education in science is a disproportionately large handicap in the collaborations.

Despite the limitations, the pairings make for interesting reading, and sometimes good poetry, too. In fact, the dialectal format — posing poets and their reflections on the process opposite to reflections by the scientists — creates a hall of mirrors effect. The poets see themselves in how the scientists view the work of poets, and the reverse. Both disciplines are called upon to see their professions from outside the comfort zone of peer-reviewed paradigms and the esteemed nobility within their respective disciplines –luminaries generally unknown to each other. These separate monologues are sufficiently compelling as counterparts in the presented text that when the occasional scientist failed to contribute, the absence was, well, palpable — as though a blank page had been printed with only their name and a page number on it..They seem, by their absent notation, to be calling the exercise unimportant, or irrelevant, or ill-conceived, or just an idle curiosity.

In this they were mistaken, Whatever shortcomings the poets or the poems might have exhibited, when these worlds collide, the results are a spectacle — unscripted and unpredictable. The sequences in Sequences and Pathogens take on a shape of their own, partly due to the paired reflections, or to the occasional arresting metaphor in the poetry.

The results at times were moving to their subjects. In a response to Jacqueline Saphra’s “Partita,” Ellen Solomon wrote, “While I am a lover of poetry, and perhaps try to think somewhat poetically from time to time I cannot imagine what process must occur to produce a piece such as Jacqueline did about me . . . utterly unimaginable. I cried when I read it.”

For her part, Jacqueline Saphra’s reflection successfully solicits the reader’s sympathy as she casts about yet for an appropriate subject for her poem. The result, which conjoins a research endeavor with a Bach partita, resulting a line referring to “duets of thought and intuition” reveals a failing in a poet’s training — and not Ms. Saphra in particular.  She’s experienced a hospital atmosphere – convergences of science and suffering and — what?

What follows will seem harsh, but it is an unmistakable impression. The scientists in the collection understand their place; they understand the purpose of their narrative, of their place in the Sequence (if not the pathogens).  The poets seem lost, desperately, even desultorily chasing ad homenim aspects of what they had seen. They seem young even when not young in years, immature, narrowly read.

There are also emergent features of the landscape of the collaboration. Cancer, perhaps as much due to its high funding profile in microbiology (contrasted with say, biomechanics or more theoretical foundational work) rather than scientific gravitas, is a pall over the entire enterprise. Clinical metaphors (recall the “pathogens” element in the title “Sequences and Pathogens”) carry a disproportionate — and completely understandable — anthropomorphic load.  In the hands of the some of the poets in this collection, cancer cells take on an agency of their own: morbid, non-neutral, embattled, or cheated — reluctant acolytes. In Simon Smith’s “Chromosome 7: An Elegy,” he refers to

BRAF cell-deep
in your smile as you eat & sleep
walk

In “Gower’s Manoeuver,” Kayo Chingonyi refers to “the arbitrary dance of code,” and Lehane in “The Race” to “crack the code.”

Is theirs a tone one of awe? Or is “deep in the code” reference to some disreputable puzzle? Is this why the editors credit the scientists with titles like “Professor,” whereas the poets are appellation-less?

What would otherwise be seen as a limitation should instead be seen as a part of a growing body of evidence pointing to just how big is that unwritten-about load.

For the poets in Sequences, the exercise is epistemological, domain-specific (Simon Smith’s “unconnected knowledge”), and in some sense, unusual. As poet Helen Ivory explained in her reflection, ““How can you find metaphors when you don’t know what metaphor is a metaphor for?”

In the lightly read ledger wherein the relative importance of these two enterprises is judged, a poet’s effort is existential. Poetry’s relevance to science is a sentiment. Science is a nimble road machine in whose dust poets labor from an ever-increasing distance.

Niall O’Sullivan’s “A Rainy Afternoon with Sir Tom Blundell” put it this way:

. . .  as within our mutual bodies
mysteries continue to unfurl,
invisible and oblivious
to the selves that ponder them.

In her “In the House of the Scientist,” Elizabeth Simpson explained that

So it is with the business of science.

Despite hopeful signs as Huxley’s 1963 Literature and Science, the gulf between these worlds is, as Chingonyi wrote in “Manouevre,“one of those things stored with the other sadnesses for which no one is to blame.”

Paraphrasing Dorothy Lehane in “The Race,” Sequences and Pathogens“ is not just another book thrust unthinkingly “into the imperial latent throb    of the world.”

Readers of this site may also be interested in the work of naturalist poet essayist Loren Eiseley.

PoetryandScience.com by Mark Underwood is licensed under a Creative Commons Attribution 3.0 Unported License.
Based on a work at poetryandscience.com
Header image from a photo by Jean-Pierre Dalbéra via Flickr.